Ex-NSA Director Discusses What We Can Expect Next From Threat Actors Tom Field (SecurityEditor) • April 30, 2018

As director of the NSA for nearly a decade, Gen. Keith Alexander (retired) saw the nation-state cybersecurity threat evolve from a nuisance to a sophisticated adversary. Now, as CEO of IronNet Cybersecurity, he's spearheading a defense.

In a video interview at RSA Conference 2018, Alexander, discusses:

General Alexander is a four-star general with a 40-year military career, culminating in the role of the director of the National Security Agency and chief of the Central Security Service from 2005-2014. He holds the distinction of serving in this role longer than any other director. While serving as the NSA director, he was appointed by Congress to be the first commander to lead the U.S. Cyber Command. He held this role from 2010-2014, establishing and defining how our nation is protected against cyberattacks. At IronNet Cybersecurity, as the CEO and president, he provides strategic vision to corporate leaders on cybersecurity issues through the development of technology, consulting and education/training. 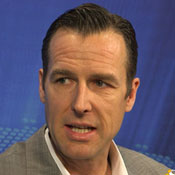